There Is a Pursuit: How I Wrote ‘Bulk’ 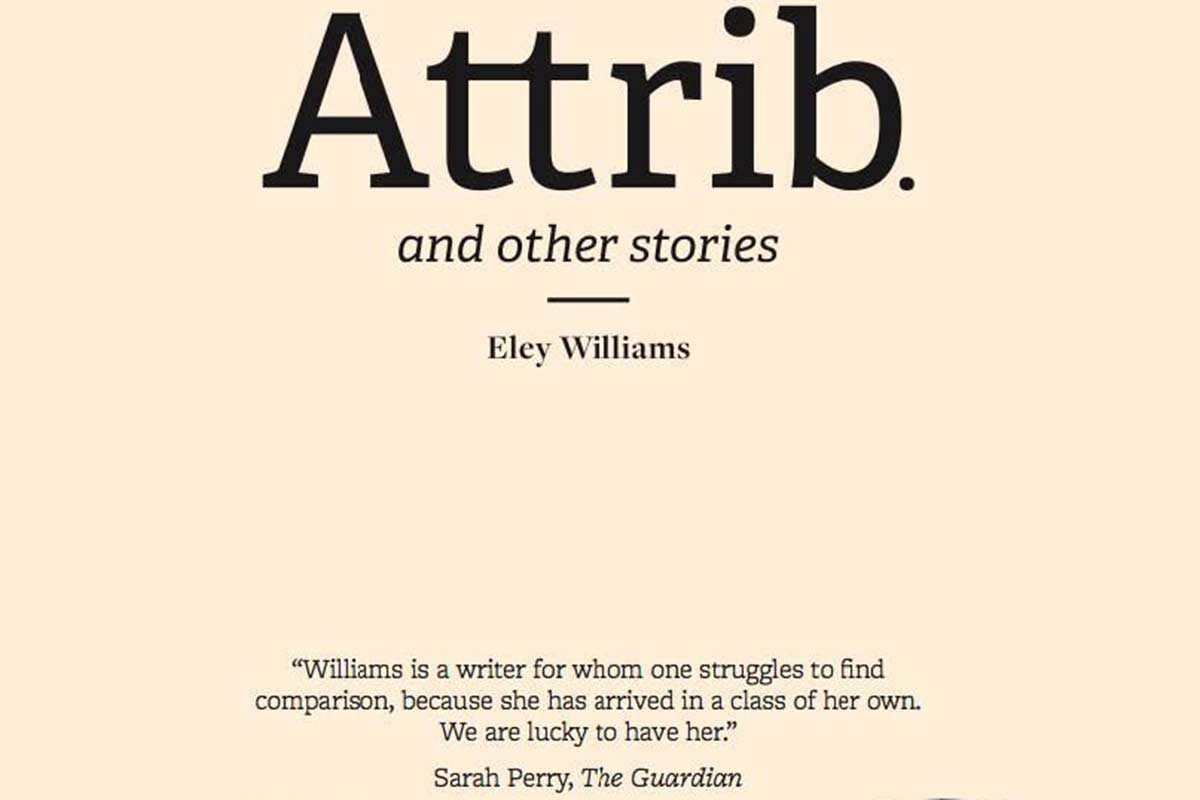 ‘Bulk’ is taken from Eley Williams’ collection Attrib (Influx Press, 2017), which was awarded the Republic of Consciousness Prize and the James Tait Black Memorial Prize 2018. You can read her story here, reproduced with kind permission of the author and Influx Press. In this interview, we spoke about her reasons behind the choices that makes this such a remarkable story…

Did you start with the image of the beached whale? Did you have a plan for how you wanted this to develop or surprise yourself as you wrote it?
My sister is a zoologist, currently living in Denmark. In the course of a phone conversation peppered with small talk and the usual back and forth, she casually mentioned that one of her duties that week was to pop up and assist with the removal of a dead beached whale and perform a cetacean biopsy on it. She described the strangeness of the scene: its skewed sense of perspectives, the disruption to the normal patterns of the day, the use of a local fishing museum to supply requisite saws and gauntlets. The story really is drawn from a central sensation (rather than image) that she described. Down the phone, she told me that as she reached into the opened body of the whale to haul at its tendineae (colloquially known as the ‘heart strings’), she could hear the wind whistling through the cords and there was an audible note, as if the whale had been turned into a huge Aeolian harp in her hands. I wanted to nod to this sense of the mythic and the absurd as well as the incidental or familiar in this story. I also had stored somewhere in my memory an article about an oil painting of a coastline that had needed cleaning; upon restoration, it was revealed that the original composition features a whale on the beach. There’s no direct correlation to the story in ‘Bulk’ but I think this sequence of events, and the notion of the vastness of beached whales being linked somehow with the overlookable, played some part in the idea coming together.

In a disparaging moment you said you’re “not hot on plot” but surely neither are the best short story writers. Which authors do you think were an influence on this piece?
I do tend towards self-disparagement on this, I suppose as a means of covering up my sheer envy of those who are able to enact and engage sprightly, taut plots in their fiction. But, in the hope that there’s something to be said for the seethe or the surge or the shift of a moment. Although very different stylists, writers who I admire for exactly this in their prose include Ali Smith, Miranda July, David Hayden, Francis Ponge.

You have described your narrator as “over-thinking, or getting snagged in networks of over-association and dis-association.” What effect did you want to have with this writing style?
I’m interested in narrators, or situations, where uncertainty is at the fore rather than purposefulness. This is not necessarily about ‘unreliability’, or teasing the reader in terms of how far they can trust (or distrust, or mistrust) the narrator’s account. Depending on your idiom, a huge whale on a beach should be ‘the elephant in the room’ or the ‘dead cat on the table’ for characters, who are suddenly only able to see themselves in terms of their proximity to it or the status they can assume in terms of controlling what happens next — I thought it might be more interesting, therefore, for the circumstances in ‘Bulk’ to be experienced and expressed in terms of the askance or the tentative, rather than the direct, clear or pragmatic.

The dynamic of the group was uncomfortable, with strange relationships and agendas coming out. Did this come out as you wrote or was it something you set out to explore?
I haven’t done a census, but ‘Bulk’ probably is the most densely populated of my short stories: most involve just one person so this did involve some extra choreography and attention to the necessity of different (or differentiated) voices. They emerged as I wrote the piece, and their power dynamics shifted to suit what would be useful for the tonal rhythms of the piece.

You have said that “when you write stream of consciousness pieces, the problem is how to make the thought complete — without it being a ricochet of constant energies.” Did you face this dilemma writing ‘Bulk’? How did you work to overcome it?

I think parts of ‘Bulk’ concentrate upon the requirement for tasks or roles: who is going to do something about this whale? Who is able to? Who is going to have to ask for help? Even if this state of affairs causes tension or friction, or if the questions are unanswered or deemed unaskable, there is a direction or a pursuit rather than a meandering, illustrative quality to the story.

You have said that a large amount of your editing is cutting back. What sort of things did you find yourself cutting out for this story?
With this story I did not want the reader to be overly invested in any of the characters and their backstories — it might be useful to know the why, who and wheres for their appearance, but to delineate or develop their circumstances or motivations would make the story over-elaborate and perhaps a little distracting. I’m all for distraction, but this story was meant to be about encounters rather than corollaries.

You have said a goal of yours can be to make the dialogue convincingly unconvincing — I feel this is true in places in ‘Bulk’. Why did you aim for this effect?
People express themselves in deliberate, mannered, precise ways as often as they communicate in non-verbal ways, or confusing ways, or illogical ways. Some people say more with a breath than they would in a soliloquy, or the effect on the listener would be more powerful: how to ensure the mood, as well as the phrasing, is coherent? Writing dialogue sometimes has to be a mix of approximating a fictional transcript and not being overly elusive, allusive or abrupt so that it doesn’t overwhelm the reader with unnecessarily guesswork. Written text permits a certain amount of suspension of disbelief on the part of the reader at the best of times, or tolerance of a base-level editorial intrusion (the accepted upholstery of inverted commas, ‘correct’ grammar, syntax, punctuation, spelling etc). Perhaps the best I could aim for was making speech patterns recognisable.

I felt very conscious of texture in this story — the smoothness of the whale, the aubergine, beetles, the metal bowl — why make things so palpable when you are being ‘unconvincing’ with dialogue?
I think one can be startled by evasion and by specificity. If a whale’s texture feels like something familiar and specific, that’s quite an uncanny realisation and highlights a particular processing that the narrator is having to undergo. If a character announces and defines themselves with absolute clarity and awareness of their role in terms of a scene’s exposition, that can seem inhuman or clinical but not necessarily unnatural. I like your word ‘palpable’, and the use that approximations, feelings-out and (mis)handling can play in trying to establish the fact of something for a character and for a reader. It’s the trying that’s the interesting part.