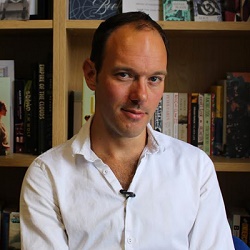 Alex Preston is a novelist and journalist. His first book, This Bleeding City, won the Spear’s and Edinburgh Festival best first book awards. His second, The Revelations, was shortlisted for the Guardian’s Not the Booker Prize. His third, In Love and War, was published to critical acclaim in July 2014 and selected for BBC Radio 4’s Book at Bedtime. His short stories have been longlisted for the Sunday Times/EFG Award and shortlisted for the Manchester Fiction Prize and appeared in the 2013 Best British Short Story anthology. Alex appears regularly on BBC Radio and television. He writes for GQ, Harper’s Bazaar and Town & Country Magazine as well as for the Observer’s New Review. He studied English under Tom Paulin at Hertford College, Oxford, and holds a PhD on Violence in the Modern Novel from UCL. He teaches Creative Writing at the University of Kent and regular Guardian Masterclasses.

Found on the web at: www.alexhmpreston.com