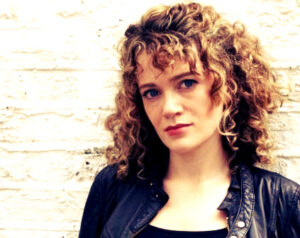 Anna is the author of The Pink Hotel, long-listed for the Orange Prize 2012. Set in Los Angeles following a young girl’s investigation into the love affairs of her dead mother, it is being made into a film directed by academy award winner Anna Paquin. “An elegant noirish mystery,” said The Independent. “Completely engrossing,” said Nylon Magazine. “Astonishingly good,” said The Times.

Her first novel, Isabel and Rocco, explores the relationship of teenage siblings left alone together in Camden Town. It was published when she was nineteen. “Dazzling,” said The Observer Review, “hypnotic, trangressive and enclosed,” said Helen Dunmore.

The Art of Leaving, is about a girl who takes pleasure in leaving the people and places she loves. “Stothard’s third novel cements her place as one of Britain’s best young authors,” said The Literary Review. Anna is also part of a group called The Wisdom Hackers, where she writes and talks about the importance of physical objects in the digital world.

The Museum of Cathy, set in Berlin’s Natural History Museum, is out soon with Salt Publishing.

Found on the web at: www.annastothard.com