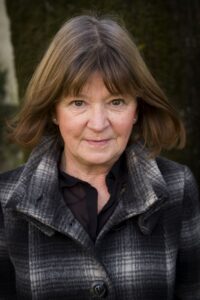 Jane Rogers is an award-winning novelist, short story writer, and radio dramatist. Her story collection Hitting Trees with Sticks was shortlisted for the 2013 Edgehill Award, and the title story was a BBC National Short story award finalist. Her stories have been widely published and broadcast. She is author of nine novels, including The Testament of Jessie Lamb, Man-Booker longlisted and winner of the Arthur C Clarke Award 2012.
Other works include Mr Wroe’s Virgins (which she dramatised for the BAFTA-nominated BBC drama series), Her Living Image (Somerset Maugham Award) and Promised Lands (Writers Guild Best Fiction Award). She has written original drama for Radio 4, and adapted numerous novels for the Classic Serial slot.
Jane is Emerita Professor of Writing at Sheffield Hallam, where she taught writing for many years. She is a Fellow of the Royal Society of Literature, and an RLF fellow in Banbury where she now lives.
Her latest novel, Conrad and Eleanor, will be published by Atlantic in June 2016.

Found on the web at: www.janerogers.info