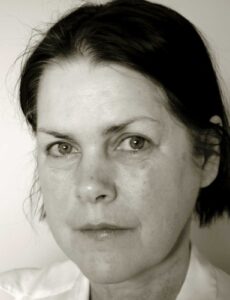 Linda Quinn did most of her growing up in a caravan in West Country fields and byways. She was inspired by the written word when she received her first postcard at the age of three, and set out to rescue as many books as she could from the local recycling dump, a collection that continues to grow.

After working in the Music Industry she trained as an actress at East 15 Drama School, and was the founder of Freefall Theatre Company, performing one woman shows and ensemble pieces, and contributing to additional projects with The Magdalena Project in Cardiff, Virginia McKenna, Cristina Castrillo in Switzerland and Linda Marlowe. She also worked as an actress in a variety of small television and film roles.

She created and directed performances as diverse as local community theatre and Manumission Club spectaculars for audiences of 10,000 in Ibiza. Throughout this time she was scripting and editing from improvisations and developing skills that led to writing scripts, and an MA in Creative Writing at Birkbeck in London. Her work has attracted noteworthy attention in the film industry, but has yet to reach the screen. She now lives and works in London, teaching Creative Writing at City Lit. More recently, she is focusing on completing her first novel and a series of short stories. She is also the co-founder of Pikes Ibiza Literary Festival.