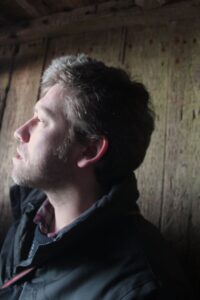 Luke Thompson is a writer of poetry and prose and the founder of Guillemot Press. He has written two short sequences of poetry, The Clearing, published by Atlantic Press, and Robot Squirrel, published by zimZalla. He has worked extensively on the poet Jack Clemo, editing Clemo’s Selected Poems and writing the first biography of Clemo, Clay Phoenix. In his other role, as editor of Guillemot Press, Luke works with writers and artists to produce beautiful short-form publications. Recent and forthcoming titles include work by poets Rosmarie Waldrop, Robert Lax, Andrew McNeillie, Rebecca Goss and Melanie Challenger, as well as new poets Amy McCauley, Nic Stringer, Sarah Cave and Aaron Kent. In 2018 Guillemot will be publishing its first non-fiction, Wolfgang Hildesheimer’s Times in Cornwall, as well as embarking on an exciting collaborative relationship with The Word Factory.