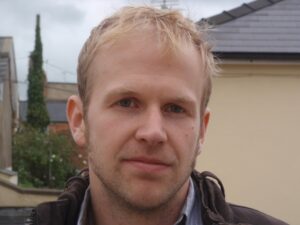 Tyler Keevil grew up in Vancouver, Canada, and in his mid-twenties moved to Wales, where he now lives. His short fiction has appeared in a wide range of magazines and anthologies in Britain, Canada, and the U.S. His story collection, Burrard Inlet, was nominated for the Wales Book of the Year, as well as the Edgehill Story Prize, the Frank O’Connor Award, and the Rubery Book Award. One of the stories from the collection, ‘Sealskin’, was recently awarded the Writers’ Trust of Canada / McClelland & Stewart Journey Prize. His first two novels, Fireball and The Drive, were also both nominated for the Wales Book of the Year and both received the Wales Book of the Year People’s Prize. Among other things, Tyler has worked as a tree planter and ice barge deckhand, as well as in factories, restaurants, video stores, and shipyards; he currently lectures in Creative Writing at the University of Gloucestershire.

Found on the web at: www.tylerkeevil.com