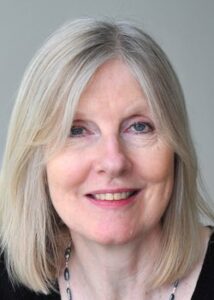 Helen Dunmore was born in Yorkshire in 1952. She won the first Orange Prize for Fiction (now the Baileys Prize) for her novel A Spell of Winter. She wrote about the Siege of Leningrad in her 2001 novel The Siege, which was described by the historian Antony Beevor as ‘a world-class novel’. It been translated into more than twenty languages. Her 2014 novel The Liefocusses on the trauma of the First World War and its aftermath through a group of three characters who come of age during that war. The Lie was a Sunday Times bestseller. She is also a poet, short story and children’s writer. Her ‘Ingo’ series of novels for children has been published around the world.
Helen’s new novel, Exposure, will be published in January. Set against a backdrop of the Cold War, spies and scandal, it tells the story of a woman’s struggle to protect her family at all costs.
Author photo: Caroline Forbes